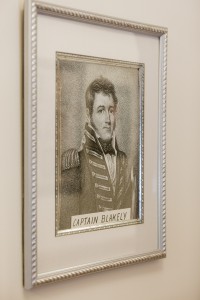 European Americans founded Early County on December 15th, 1818, however Early County (or Southwest GA) was not included in the original charter creating  the colony of Georgia. Spain, France, England, the Confederate States, and the United States flags have all flown over Blakely. The platting of Blakely soon followed in 1825 as county seat for Early County. It was named for Captain Johnston Blakeley (also spelled Blakely), one of the most successful American naval officers during the Quasi-War and War of 1812 period. During this time Captain Blakeley commanded two vessels, the Enterprise and the Wasp (which, in 1814, disappeared at sea with the Captain and all crew members and remains a complete mystery to this day).

Blakely and Early County’s rich history is entrenched in early life along the Chattahoochee River, battles for territory (including one commanded by Major General Andrew Jackson who went on to become our 7th US President from 1829 through 1837) and Creek Indian heritage. These history-forming subjects can be researched and enjoyed at the Kolomoki Mounds State Park and Indian Museum and the Early County Museum.

The city’s population* has grown to 5,371 (with current estimates at 5431) spread out over 17.6 square miles and is home to several community-sustaining industries, independent businesses and natural resources.

To learn more about our beginnings, click Historical Notes on Early County and Blakely, Georgia.

Want to Dig A Little Deeper into Your Roots?

The Genealogy Society of Early County, Georgia provides information about our society to encourage the exchange of genealogical information and research techniques. Meetings are held the 3rd Thursday of each month from 5:00 pm – 7:30 pm at the Community Education Building located in the Early County Museum at 226 North Main Street. It is open to all citizens interested in tracing their family history for a yearly membership fee of $20.00. For applications and additional information, please contact Julianne at 229-724-7222.

*According to the 2020 Census by the United States Census Bureau